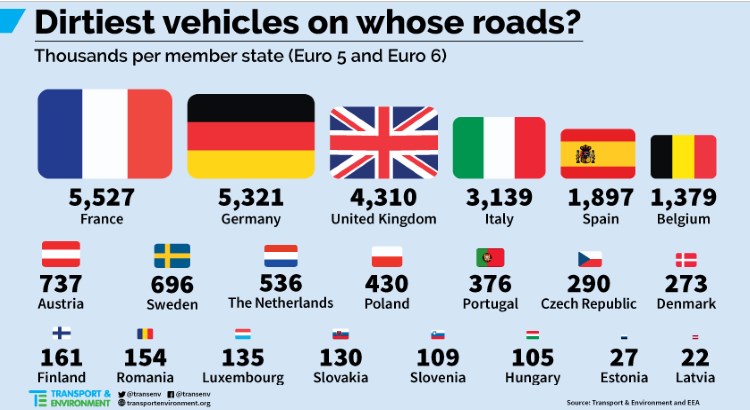 You thought environmental cheater Volkswagen was the worst guy around?

It has been around a year since Germany’s Volkswagen got caught cheating about the emissions of its diesel cars. Volkswagen is one of the largest car companies in the World with millions of cars on European roads. Several countries have banned the sale of effected Volkswagen models on their soils, but EU and EU countries have been -so far- notably lenient towards Volkswagen.

Now we know why. Because Europe’s diesel problem is much worse than the cheat of Volkswagen. It turns out France, Italy and other countries have just followed the old English advice of “People who live in glass houses shouldn’t throw stones”.

Volkswagen was just unlucky to get caught! The crime gang is much much bigger!

As Dieselgate turns one year old, a new study by Transport & Environment (T&E) – an environmental campaign group in Europe- reveals that Volkswagen is currently selling the least polluting (Euro 6) diesel vehicles. Nonetheless, the marque caught cheating in the US also has the most grossly polluting Euro 5 vehicles on the road, which were sold between 2011 and 2015. The better performance of Volkswagen Euro 6 cars has nothing to do with the Dieselgate, but with better technology choices made before the scandal burst. The report Dieselgate: Who? What? How? also found that not one single brand complies with the latest air pollution limits (‘Euro 6’) for diesel cars and vans in real-world driving. 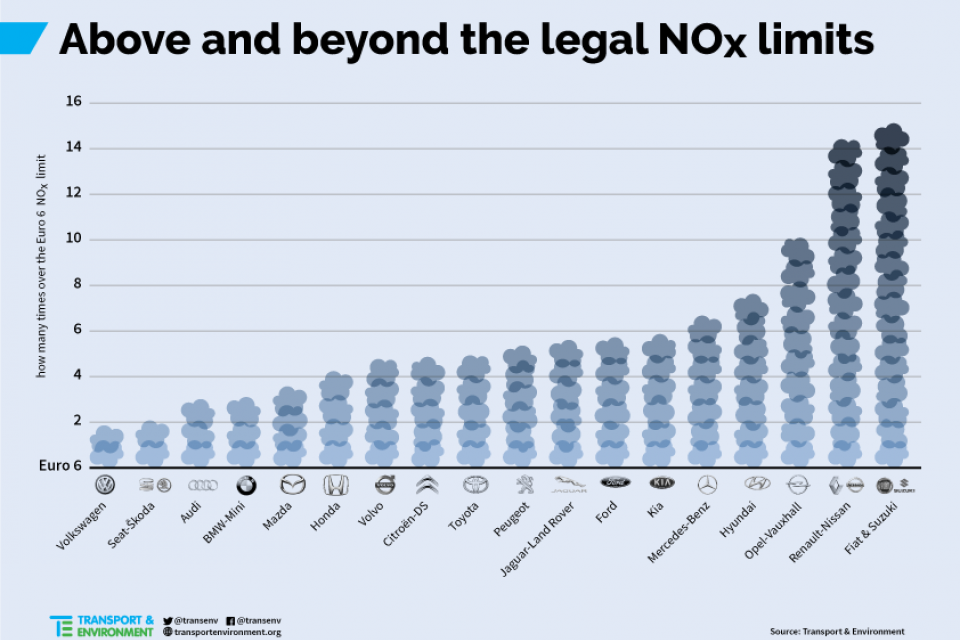 T&E analysed emissions test data from around 230 diesel car models. Data were taken from the investigations conducted by the British, French and German governments, as well as a large public database. The carmakers’ ranking was built with on-road performance figures mostly measured in real world driving. The key findings per car brand are: Fiat and Suzuki diesel cars on average pollute 15 times more than the legal NOx limit; Renault-Nissan vehicles exceed the limit more than 14 times; General Motors’ brands Opel/Vauxhall pollute 10 times more while Volkswagen diesel cars pollute twice as much as the Euro 6 standard.

Greg Archer, clean vehicles director at T&E, said: “One year after the US caught Volkswagen cheating, all carmakers keep selling grossly polluting diesel cars with the connivance of European governments. The automotive industry has captured its regulators, and European countries must now stand up for their citizens and stop this scandalous cover up. Only a recall of all harmful diesel cars will clean up our air and restore credibility in Europe’s legal system.”

T&E’s calculations also show that today 29 million diesel cars and vans are driving on Europe’s roads that we classify as ‘dirty’, meaning that, for Euro 5 cars, they are at least 3 times over the relevant NOx limit. Only one in four diesel vehicles registered since 2011 achieve these modest thresholds. These vehicles were approved for sale by national type approval authorities, mainly in Germany, France, the UK, Spain, Italy, Luxembourg and the Netherlands. The largest number of ‘dirty’ diesels is found on French roads (5.5 million), followed by Germany (5,3 million), the UK (4,3 million), Italy (3,1 million), Spain (1,9 million) and Belgium (1,4 million).

European countries protect their carmakers causing the death of 10s of thousands of Europeans every year!

“The true scandal of Dieselgate in Europe is national regulators turning a blind eye to the glaring evidence of test cheating with the sole purpose of protecting their national carmakers or their own business. This is killing tens of thousands of people annually. We need a European watchdog to stop EU member states protecting their national champions and to ensure the single market for vehicles operates in the interests of all citizens,” Greg Archer said.

Cheating on environmental regulation is not a victimless crime. This causes premature deaths. The World Health Organisation has described worsening air pollution levels as a “public health emergency”. Last year, the European Environment Agency said that NO2, mainly created by diesel engines in urban areas, is responsible for an estimated 72,000 premature deaths in Europe. The majority of NO2-related premature deaths occur in Italy (21,600); 14, 100 in the UK; Germany (10,400); 7,700 in France; Spain (5,900) and 2,300 in Belgium.

Transport & Environment report: Dieselgate: Who? What? How? (PDF document 2.4MB)