An important milestone for the proposed undersea tunnel between Helsinki and Tallinn will soon be reached. Also known as the FinEst (an acronym of Finland and Estonia) Link and ‘Talsinki Tunnel’, the around 100 kilometers long railway tunnel will connect the two capitals with each other via a high-speed train connection. The tunnel – 200 meters deep under the Baltic Sea at its deepest point- will not only have two tubes for train connection between the capitals but will also accommodate ultra-fast Internet and other communication cables. The fixed link is expected to hugely increase the economic competitiveness of the whole area.

The idea had been being championed for some time already by the visionary Finnish entrepreneur Peter Vesterbacka (of the computer game Angry Birds) and the FinEst Link organization. Vesterbacka et.al. had even secured Chinese financing for the project in 2019 but up until now, the Estonian side had been a bit critical of the project.

The purpose of the proposed project is to develop mobility between Helsinki and Tallinn and to provide the framework for deepening economic co-operation between Helsinki and Tallinn. The proposed tunnel link is also called ‘Talisinki Tunnel’ or FinEst Link. The expectation is that, it will create twin-city relationship between the two cities with, for example, Finnish people living in Tallinn where housing is cheaper and commuting to Helsinki for work.

To start with, the Estonians did not like the idea of Chinese funding, but also a multi-discipline Estonian study claimed that Tallinn and Helsinki tunnel may make the water of Viimsi residents unfit for drinking. According to the study, unlike on the Finnish side, which is mainly granite, the Estonian side of the tunnel will also pass through the loose sandstones of the Ediacara and Cambrian deposits and could effect the movement of the groundwater in these deposits. This could cause the seawater penetrating the groundwater layers, said the study.

Only 10 months ago, an article published on Estonian Government’s website had declared that Minister of Public Administration Jaak Aab would recommend the Estonian Government not to initiate the state plan for the Helsinki – Tallinn tunnel. Minister was quoted as saying “I commend the developer FinEst Bay Area Development for their ambitious and innovative plan to establish an important connection for the two countries,.. However, in the light of the information known to the state today, we have reason to doubt the feasibility of this project for environmental, economic and security reasons. In addition, the creation of a transnational connection is possible only with the will of two countries and full cooperation. To this end, the common interest of the countries must be agreed before the tunnel is designed.”

In short, the Estonians have not been that enthusiastic about the tunnel project. There are now signs that this is about the change. The Estonian government has finally given the mandate to Taavi Aas, the minister of Economy, to sign an intent agreement with Finland to build the 100 km long undersea tunnel. Although the agreement is only a non-binding intent-agreement, with no guarantee to proceed with the project, it opens the door for future official talks to take place. Up until now, the tunnel proposal was some interesting idea pushed for by the visionaries. From now on, it is a proposal to be talked on the governments level.

The intent agreement is also important for making the proposed tunnel eligible for the European Union’s funding via the Trans-European Transport Network program. Initial estimates say the 100km long undersea tunnel will cost €9–13 billion though most people think the actual cost will be in the range of €18-25 billions. 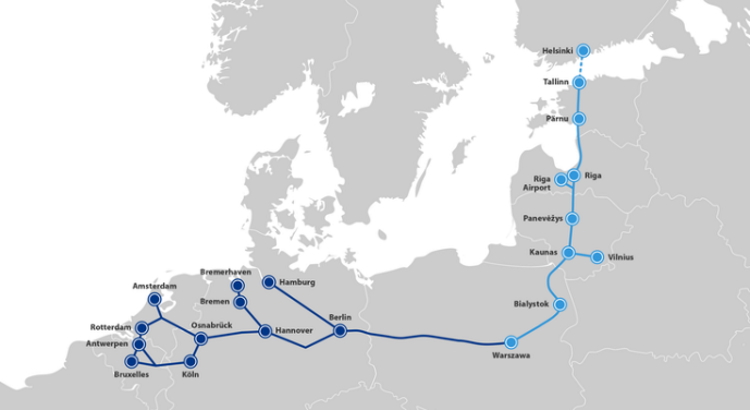 The second initiative is a private initiative which moved forward in March 2019 by Peter Vesterbacka. Vesterbacka has even arranged a funding by making a tentative deal with the Chinese investment company called Touchstone Capital Partners. The deal consists of memorandum of understanding for a 15 billion euros financial deal to fund 4 stations, the tunnel and the trains.

In the past, particularly the Estonian side has been very ciritical of Peter Vesterbacka’s tunnel plans, especially because of Chinese funding. Estonia still has the trauma of Soviet times, for the right or wrong reasons and feel threatened also by today’s Russia. Involvement of China in such an important project is widely seen as a national security risk for the country. An annual report of the Estonian Foreign Intelligence Service even claimed that the chain of command in the proposed financing scheme of FinEst tunnel may go all the up to the China’s central government.

Err.ee quotes Estonian Prime Minister Kaja Kallas (of Reform party) saying it is too early to say exactly how the tunnel will be built. PM is also quoted saying “But in the case of such a huge project, it is important that both countries express their will,” she said. “I hope that the protocol will be signed and that we can move forward with preparations for the possible construction of the tunnel by the state”. Does this translate as it will be now an inter-governmental project instead of a private undertaking? Does it mean that a substitute for Chinese funding will be explored and found? Time will tell.

The map by RB Rail AS, CC BY-SA 4.0, via Wikimedia Commons