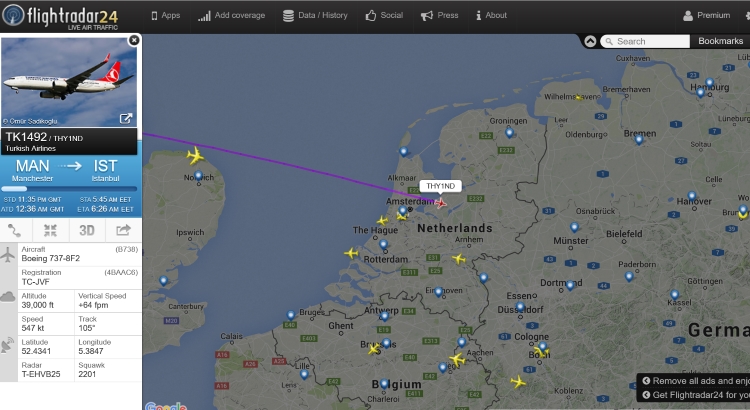 FlightRadar24 information includes real-time flight tracks, positions, altitudes, headings, speeds, departure points and destinations, flight numbers and aircraft types. It can also show time-lapse replays and data of past flights by airline, aircraft, aircraft type, area or airport. E.g. to “play back” a past flight, all you need to know is a flight number. Like TK1492 of the Turkish Airlines flight from Manchester to Istanbul Atatürk airport.

The FlightRadar24 not only shows the flight path of a place, but also other flight parameters like its speed, altitude etc as well as other data like the type of the aircraft. For unusual flight events, the data of the website is often used in reporting the event in the press like “Graphs from FlightRadar24 reveal Air Canada’s AC549’s sudden 25,000 foot descent“.

The data of FlightRadar24 is so reliable that, it is used more and more as an ‘authoritative source’ in reporting accidents.

How do they do it?

So, how do they do it? The name of the game is ‘crowdsourcing‘ as Forbes article puts it. FlightRadar24 compiles its data from many sources. It listens to the signals of the planes’ transponders in real time and combines it with the data received from the USA’s Federal Aviation Authority (FAA).

It all started by two Swedish aviation enthusiasts in 2006 for Northern and Central Europe. They started listening to the signals of planes’ transponders via their ground based ADS-B receivers. In 2009, they opened it for anyone with a suitable ADS-B receiver to contribute data. Later they started to receive data from FAA as well as using a technique used “multilateration“.

Do the terrorists also use it?

As anybody can use it, so can the terrorists. Just like they also use the telephone or internet network.

FlightRadar24 blocks some flight information from display for “security and privacy” purposes. It mostly involves the flights of the “royal” families or heads of states. Since such people often jet around on private planes (financed with the taxes collected from people), it is easy for FlightRadar24 to hide their flights. But now or then, their staff forget to report a specific flight to FlightRadar24‘s exclusion list and we hear in the press “how the security of a king or prince has been compromised by FlightRadar24“.

FlightRadar24 is available as a website, as well as a mobile app.